The birth and childhood of Ireland's greatest hero, retold with all the reverence and magic he deserves.

Ask anyone who isn't Irish to name an Irish hero, they'll either say Fionn or Cuchulain (or some approximation of those names) if they don't look at you blankly. Fionn's fame has rightly spread far beyond Ireland, and this book is the perfect way to introduce your foreign relatives (or your Irish children!) to him for the first time. Starting at the meeting of his parents, it goes right through Fionn's childhood right up until he takes command of the Fianna (oh, er, spoiler?). The illustrations keep things light and the story is fast paced, event he bits where Fionn is just wandering around. Note that while there is a pronunciation guide at the start, you might also find it useful to have a map at hand as the story ranges all over Ireland at various points.

The only problem I have is with one design choice. The pages are shaded dark around the edges, and in places it makes it difficult to read the writing. That's a minor thing, though, in an otherwise fabulous book. Buy it; you won't regret it. 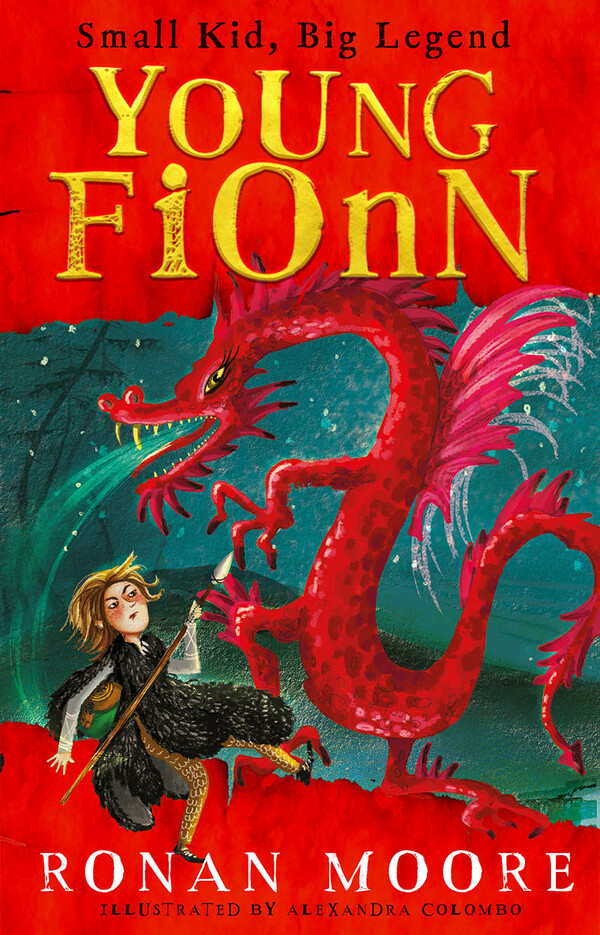 He is Ireland’s most famous warrior, a legendary figure who has enchanted children for millennia. But who really was Fionn Mac Cumhaill? And what was he like when he was a child?

In this wonderful, modern retelling of an ancient tale, based on a 12th-century manuscript, Ronan Moore brings young Fionn to life in a series of wild adventures.

A cheeky kid, constantly trying to outsmart the adults around him, Fionn is on the run from his father’s enemies who want him dead. Travel with him as he journeys throughout Ireland, evading capture, outwitting enemies, and training to become the greatest leader Ireland has ever known.

Including the well-known myths of the Salmon of Knowledge and the Dragon of Tara, this book will appeal to all children as they follow Fionn’s life up to the point of his becoming leader of the Fianna.
Posted by Friendly Neighbourhood Bookseller at 14:29