As the World Falls Down by Katy Nicholas

Halley survived the pandemic that took most of the world, and her aunt seems to be immune. Stifled in their tiny cottage, Halley strikes out against her aunt's wishes to look for other survivors.


I'll be honest. I wasn't sure about this. The blurb makes it seem like a romance, and I'm not a huge fan. However, I am a massive fan of post apocalyptic stories, and with the news at the moment I thought this was an appropriate read. (Note to readers in the future: at the time of writing the Coronavirus is spreading around the world, albeit with [so far] a 2% death rate rather than the 99.99999999 ad infinitum depicted here.)

It's not a romance, exactly. Two of the characters do become (quite graphically described) lovers, but loneliness and horniness play as big a part in it as love. Another couple has been together for a while, but they don't show it much.

It is a fabulous post apocalyptic story. It's rare to get one set this far past the apocalypse, where survivors have settled into things. Katy gives her scenes a wonderful, creepy atmosphere. She thought of things most writers don't, like gas and diesel going bad and power plants needing to be shut down.

I am a little confused, though. At one point Halley muses that because people died so quickly, a lot of places aren't looted. But the 'before' segments show that the plague stretched out over months. There must have been people, near the end, who were desperate enough to loot. Maybe Halley just hadn't come across those ones.

I also thought that the survivors had very little reaction to finding out the virus was designed to kill almost everyone. Maybe they were in shock, maybe they were numb, but it still seemed strange to me, after everyone had lost so many loved ones.

I really enjoyed this read, although I skimmed a few sex bits...no shade if you liked them, just not my cup of tea!...and I'm looking forward to reading more from Katy to find out what happens next. 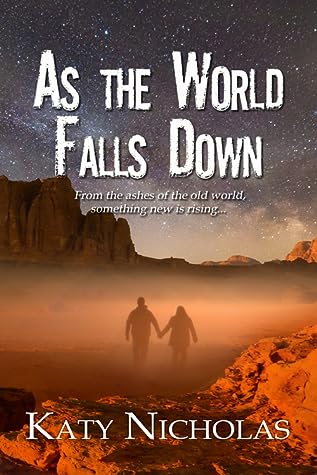 Years after a mysterious plague wipes out humanity, Halley Clarke leaves the safety of home to search for other survivors. She finds Nate Reynolds, a young man devastated by loneliness and despair. Instantly, there is an inexplicable connection between them, and it becomes clear that this was no ordinary virus. They soon discover they aren't the only ones changed by the virus or guided by strange feelings or voices. Their lives and the survival of humanity rests on uncovering answers and understanding their new world. Will the truth they unearth bring them closer together or tear them apart?
Posted by Barker and Jones Staff at 10:00