John and Stew are home alone while their father is out of town on business. So far, so normal. But it means he's missing when the biggest blackout is history hits, taking out power for the whole state and maybe beyond. Now John finds himself in charge of his recalcitrant brother and two tagalongs as they try to reach help in time.

I know a bit about survival tactics (armchair interest, I don't own survival gear or supplies, please don't raid my house) and I have to agree, on one topic, with minor character Nate. Any good stockpile needs to be concealed for exactly the reasons shown here. A stockpile people know about is not going to be your stockpile for very long.

This is an interesting survival story, for all that the survival tactics are mostly made up of walking. I made a guess about Stew early on and was proven right about halfway through, which leads me to the only other problem I have with this book:

It involves a SPOILER, so I'm leaving a gap.

Last chance to give up!

Ok. John and Stew both act as though losing the generator means that all Stew's insulin is immediately unusable. Insulin is good for a month at room temperature. Granted, it's summer in Nevada, so maybe it would very quickly break down; I couldn't find exact information on line, but keeping the fridge closed with the insulin inside would have helped a little. I'm going to assume it's the summer heat thing, because if it's an attempt to add urgency, it's completely unnecessary and hamfistedly done; they're already on a deadline because they have very little food or water, they didn't need the extra added clock.

Apart from that, this is a very well written, tense story. John makes the occasional stupid mistake, but since he's...sixteen? Seventeen?...we can allow for that. Oddly, the moment that made him most recognisable to me was when, although he didn't really believe that his father would be able to make it back to them, he carefully cleaned and tidied his room just the way his father liked it. That tiny spark of hope made him feel very real.

A great read for survivalists, real or armchair. (Like me. Again, please don't raid me.) 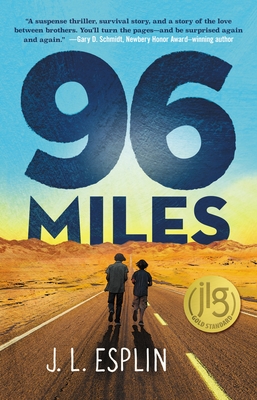 Dad always said if things get desperate, it’s okay to drink the water in the toilet. I never thought it would come to that. I thought I’d sooner die than let one drop of toilet water touch my lips. Yet here I am, kneeling before a porcelain throne, holding a tin mug for scooping in one hand, and my half-gallon canteen in the other.

The Lockwood brothers are supposed to be able to survive anything. Their dad, a hardcore survivalist, has stockpiled enough food and water on their isolated Nevada ranch to last for months. But when they are robbed at gunpoint during a massive blackout while their dad is out of town, John and Stew must walk 96 miles in the stark desert sun to get help--and they have only 3 days before their time runs out....
Posted by Friendly Neighbourhood Bookseller at 10:00