The Threads of Magic by Alison Croggon

Pip and his sister El accidentally come into possession of an ancient heart, part of a spell to overcome the evil Spectres. Pip finds himself tangled with the princess and some hunted and oppressed witches as he tries to keep the Heart safe and complete the spell to protect them all.

This is a fantastic, literally, read. The characters are brilliant, the settings are vividly described, and the exposition is given at just the right speed. I think I liked Georgie best, but they're all so good it's hard to pick! I don't know if there'll be more in this series, but I hope so, because I'd love to know what happens next, and I think there are a lot of untold stories in Clarel yet to be found. 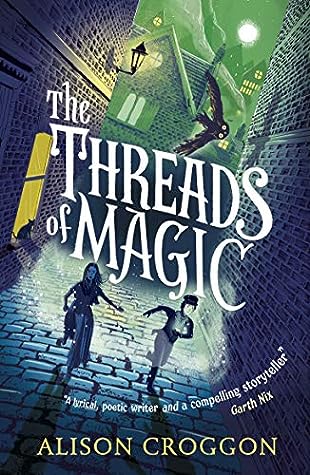 Pip lives on his wits in the city of Clarel. When he pickpockets the wrong man, he finds himself in possession of a strange object – a heart in a silver casket. What’s more, the heart seems to be trying to communicate with Pip, and the royal officials who lost it will stop at nothing to get it back.

Pip has unwittingly broken an ancient spell, and his theft will have far-reaching consequences for the whole city. As the ancient war between the Spectres and witches of Clarel reignites, the heart prepares to seek revenge for all it has suffered…

Alison Croggon conjures a rich, immersive world with brilliant and memorable characters in this captivating story of loyalty, courage and friendship.
Posted by Friendly Neighbourhood Bookseller at 10:00