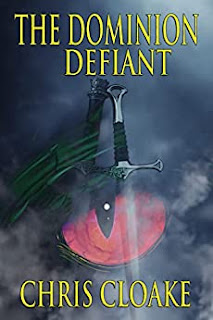 An ancient adversary in the east seeks to invade Ordefima and claim the treasures it holds.

When his beloved sister is captured, Rupert, the youngest son of the ruling family, is sent to save her. As the power of the enemy increases, can he overcome personal tragedy, emotional entanglements and lost allegiances to emerge as the hero? Or will subversive forces and increasing austerity inspire the people to rebel against him?

The Dominion - Defiant is the second book in the fantasy trilogy. If you like epic adventure, dark brooding menace, vivid characters and imaginative settings, then you’ll love this latest instalment by popular author Chris Cloake.

By the seventh day, Socha had given up any realistic chance of a rescue. The terrain had become mountainous and she gathered from the conversations of the bandits that they were nearing their destination. She had to try anything and everything to engineer an escape for the sake of her dominion. Giving up was not an option, however much logic suggested it. She was a key member of a family with a proud heritage that had always overcome the greatest adversity.

So when camp had been made and their rations eaten, Socha did not get up to go and sleep as she normally did, but lingered, turning over the charred scatterings on the edge of the fire with the toe of one boot. Vucusa watched on curiously.

Vucusa was amazed. Socha’s deep brown eyes were trained on him and he saw the pleading she was summoning. He ran his rough tongue across his dry lips. He could not recall any woman looking at him like this before.

Fantastic! The book is on sale now so you can find out what happens next...and what happened before, for that matter! Remember to check out the other stops on the tour for more extracts, reviews and chats with the author. 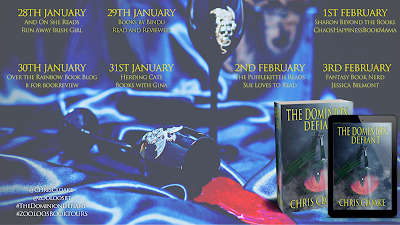 Posted by Barker and Jones Staff at 10:00