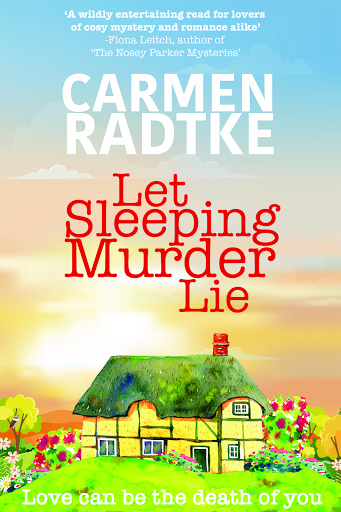 American Eve Holdsworth is living her quintessential English dream in a picturesque village in the countryside. Meeting an attractive stranger adds to the appeal.

But Ben Dryden is a pariah in Eve’s new neighbourhood, since his wife was murdered five years ago, and he was the only suspect.

Eve, who is absolutely sure someone as charming as Ben could never be a killer, is

determined to solve the case and clear Ben’s name, even if it’s against his will.

Soon enough Eve finds herself in deep waters, and with her life at stake, she can only pray that her romantic notions won’t be the end of her …
Welcome to the blog tour for this excellent novel! I have a fantastic extract to share with you today. Make sure to check out the other stops on the tour for more exclusives!

Ben stooped over his father’s wheelchair and wrapped the woollen throw around John’s spindly legs. Despite their best efforts the draught in the lounge persisted. Donna used to complain about it.

Ben’s stomach lurched. He had successfully stopped thinking about his wife for a long time, but since he met Eve, Donna popped up in his mind unbidden, and unwanted.

He must have winced. John looked at his son. His body had shrunken after the second stroke left him permanently crippled, but his mind stayed sharp as a tack, and his vision was clear enough to read his son’s face. “Problems?” he asked as he moved his heavily veined hand towards Ben’s shoulder. John’s right side had suffered the brunt of the damage. He could still feed himself with his left hand and button up his shirt, he could even lift himself out of the wheelchair to use the bathroom, but in a not too far future he’d need help for that too.

“Bit of a headache,” Ben said. They never spoke about Donna. There was no need to.
Thanks for letting me on the tour!
Posted by Friendly Neighbourhood Bookseller at 15:00