Interview: Lisa Luciano, The Chosen Ones 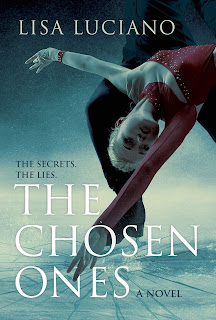 A chilling message left on an answering machine warns that one of the world’s top male figure skaters will be dead before the end of the Olympics. A disgraced reporter has one chance to save a life and resurrect his career by going undercover as a trainer in order to infiltrate the backstage world of figure skating. What he discovers hidden behind the smiles and sequins, is a chilling and dangerously competitive world filled with corruption and scandal.

Written by former NY Times reporter Lisa Luciano, The Chosen Ones is set in the '90s (figure skating’s golden age). Though fictionalized, the story is inspired by real-life skaters and events.

In this non-stop thriller, only one person can win. Not everyone will survive.


Hi everyone! Today we have author Lisa Luciano with us for a quick chat. Her novel is about the world of figure skating. I'll be honest: all I know about figure skating is that Torville and Dean do it, and Dick van Dyke once solved a figure skating murder on Diagnosis Murder, but I'm looking forward to changing that. Lisa, thanks for taking the time to talk to us. Let's get right into it.


* Tell us a bit about yourself.

I was always a voracious reader and loved sports. When I was a junior in high school I read a book called Ball Four which told the truth about the corruption in professional baseball. It made me realize the power of words and that’s when I knew I wanted to be a writer. I studied journalism in college but found it difficult to break through the then male-dominated sports journalism world. So I became an English/Technology teacher.

In 1988, I had a book published about how to use technology to teach English more effectively. Then, on a dare from a friend, I wrote an article about how unfair it was that professional figure skaters weren’t allowed to participate in the Olympics. Against all odds, it was published by the NY Times and that led to me writing about the sport for the newspaper from 1991 -1994 when figure skating was at its height of popularity. One of the things I am most proud of in my career is that in some small way, I hope I helped break down barriers for female sports journalists.


* What made you choose this topic for a novel?

My work for the NY Times had exposed the dark, backstage reality regarding cheating and many other issues and had prompted changes in the sport of figure skating, so I was shocked when one day I was told they no longer needed my services. I could come to only one conclusion - the people and organizations I was criticizing wanted me silenced and had put pressure on the newspaper.

I had learned so much about the sport that I hadn’t yet had a chance to write about but I felt needed to be fixed that I came up with the idea to write a novel. That resulted in The Chosen Ones which can be labeled as realistic fiction or creative non-fiction as it was inspired by actual skaters and issues in figure skating.


* What kind of research did you have to do?

Much of the research came from work for the Times. I also had made contacts within the sport and became acutely aware of the problems going on behind the scenes. I watched countless hours of skating competitions to learn how the judging system worked and studied the rules as well as the technical side of both amateur and professional skating to be able to use the proper terminology and give as realistic a depiction of the action as possible. Having been a gymnast, I was able to use that experience to help understand the inner workings of the characters. Putting everything together allowed me to shape a plot that told the story of the sport through the eyes of the competitors and at the same time brings the reader along for the ride.

My favorite type of reading has always been non-fiction. I’m also a news geek. So I read/watch as much as possible. What I’m finding interesting is following how information on the Internet continues to evolve, especially through social media. There are many positives to people being able to share ideas, but the trend of opinions being offered as fact, especially in the case of people calling themselves journalists, is disturbing.

I spent 40 years teaching my students how to find and evaluate information so they can make informed decisions about what they think and believe, and realize it is harder than ever before to figure out what the truth is. My hope is that the news media and those controlling social media platforms find a way to separate or label what are opinions vs. factual information without letting their own personal or political agendas affect what they write, say or post online. It’s a daunting task, but we have to put the truth first. We owe that to our audience.


* Fascinating stuff! Is there anything else you'd like to tell our lovely readers?

I would like your readers to be aware that they don’t need to know anything about figure skating to enjoy The Chosen Ones. It is a murder mystery that is set in the world of high stakes sports that sheds light on issues that have been kept secret for far too long and highlights issues that go beyond skating. Among the things the story touches on are corrupt judging, pressure to win at any cost, sexual abuse, homophobia, substance abuse, depression and eating disorders, racism and more. I think readers of all ages and interests will find something in this book that is a brutally honest look at the secrets behind the sequins.


Sounds like a great read! Thanks for taking the time to talk to us, Lisa. The Chosen Ones is in print and available at the moment, readers. Make sure to check it out! You can visit Lisa at https://www.lisalucianobooks.com/ to find out more about her.
Posted by Friendly Neighbourhood Bookseller at 10:00